Are you feeling that your boyfriend could be using you? Yes? No? I know that doing some exploring of your deeper feelings and asking yourself the hard questions in life can be uncomfortable for many.

The fact is that a man either looks at you as a TEMPORARY companion (such as a ‘booty call,’ ‘good time girl,’ or ‘friend with benefits.’ And, this may even be without you realizing it!) Or, he’ll be looking at you as a permanent girlfriend whom he’s truly devoted to.

A man who’s using you is not ever thinking about devoting himself to you wholeheartedly – or having a real relationship with you. He’s simply looking for a brief fling where he can take advantage of you. You’re just a convenience.

Now, HOW can you really tell if a man is using you? Here are 10 blatant signs he’s just using you….

1. He isn’t that interested in REALLY getting to know you, wanting to learn all about your interests, your dreams, your family…. in fact, he doesn’t really ask you many questions about yourself at all. All he ever really seems to want to do is…. ahem…. be alone with you.

2. He doesn’t make any significant effort to please you, surprise you or make you feel special. He doesn’t buy you chocolates, flowers or gifts (if his pay packet allows it,) EVEN on your birthday, Valentine’s day or other important holidays.) If he does happen to buy you the occasional gift, it’s always related to sex…. like lingerie. Even so, he’s certainly not going out of his way for you or doing lots of nice or helpful things for you either (the hallmarks of love.)

3. He’s not very affectionate (out of bed) and he doesn’t show any significant feelings. He doesn’t gaze into your eyes lovingly, stroke your face tenderly, give you back massages…. (and you’d actually be quite happy to be able to reciprocate this.) And, once you’ve slept together, he may even try to get you out of his place – as quickly as possible! You’ve also noticed that he often makes up excuses that he needs to go somewhere.

4. He doesn’t show any sincere interest in (let alone care about, or have any obvious concern,) concerning your thoughts, feelings, ideas, goals, desires or problems. He doesn’t even appear to be that interested in how your day has been. You may even have to initiate most of your conversations. The care, interest, and concern never seems to be mutual! In fact, when you do actually talk together, it’s mainly centered on HIM, his interests etc. When you do try and turn the conversation on yourself, it always ends up quickly turning straight back to him and what HE wants to talk about. Or….

5. He hardly talks at all and appears to not want to waste any time talking with you. There’s no talk ever about the future, dating exclusively, a serious commitment or where the relationship is going. What he really likes to do instead is the ‘physical’ type of activities. That involve little planning or speaking! And, being between the sheets with him seems to be the only real connection you actually have with this man (yet after the act he always goes a little cold.) This brings me to….

6. He’s not texting, emailing you or calling you. And, when you try and contact him, he’s often not available (and your messages may not be returned for days.) In fact, he’ll rarely ever contact you first, and if he does, it’s at the very last minute (or the latest hours on the weekend.) There’s not ever any real communication between you and the only time he ever makes time for you out of his busy (and rather mysterious) schedule is to have sex! And, everything is on his time, his terms and his conditions. And, you may not even see or hear from him again until the next booty call! You’re really starting to get the impression that he’s only contacting you to have sex.

7. He’s only ever taken you on ONE actual date (if any,) and that was before you slept with him. He doesn’t take you out for dinner, out dancing or to a movie. If he does happen to take you out, you may have to pay for yourself. Usually, the time you spend together is just hanging out at each others’ places. Behind closed doors. And, you often head straight for the bedroom the moment you (or he) walks in the door. Actually, when you think about it, there’s not that many enjoyable or ‘sharing’ moments with him at all – that don’t involve sex (for its own sake.) Or, you find yourself just sitting there ‘hanging’ together in front of the TV.

8. He seems to expect you to meet his needs but doesn’t show any real interest in meeting YOURS. Not only that, but he’s not showing you (ever) that he puts your wants and needs ahead of his own. You don’t feel loved, respected, appreciated or cherished in that altruistic way! Speaking of feeling appreciated, you only ever feel appreciated or valued for WHAT YOU CAN DO FOR HIM.

9. He doesn’t want to introduce you to his friends, family or work colleagues. He doesn’t carry your pictures around with him in his wallet or cell phone either. You’re never really seen together at all. You’ve also noticed that he seems to want to keep you private from the rest of his life. He may have a jam-packed schedule or social life that doesn’t involve you (you’ve even asked him a few times if you could tag along and he looked slightly uncomfortable about it.) The rare times you do happen to go out in public with him, you notice that he isn’t as affectionate towards you and even treats you like his ‘friend.’ He may even seem to want to keep you at ‘arms length.’

10. He doesn’t ever seem to compliment you on, or notice for that matter, anything besides your body or something that pertains to your ‘sexiness.’ You rarely (if ever) hear him complimenting you on your personality, your intelligence, your talents,your ideas….

His focus is solely on the physical aspect.

12. If you refuse to sleep with a man again, and tell him you want to take a step back and take it slowly for a while, if he still sticks with you, the chances are that he’s not actually using you. Though, a man who’s using a woman will almost immediately move on to the next target!

Woman with two husbands explains how she enjoys sex with them 6 Things you should never do for the sake ‘Happy relationship’ 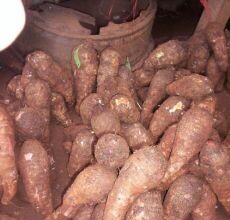 What you didn’t know about Cocoyam (Taro) – Health Tips Foods You Need to Eat to Keep Your Vagina Healthy The illness gained from engaging in too much SEX *LifeStyle