There is simmering tension between two renowned Kumasi based actors Kwaku Manu and Kwadjo Nkansah popular known as Lil Win.

The two, who used to be close friends and starred in several movies together, seem to be fighting for supremacy and relevance on the silver screen. Kwaku Manu also known as “Wo ye me taste!” who just returned from a long trip abroad, has granted a number of interviews throwing several accusations at funny actor Lil Win.

According to Kwaku Manu, his colleague Lil Win’s attitude has changed towards him on his return from abroad. He claims Lil Win as distanced himself from him and that he is definitely not the Kwadjo Nkansah he knew some years back.

Kwaku alleged that for some time now, he had observed that Lil Win has refused to star in any movie in which he Kwaku Manu is involved in citing that as the reason why Ghanaian movie lovers do not see them together in movies anymore.

Kwaku made a shocking revelation that Lil Win is being ill-advised that he (Kwaku Manu) is using ‘juju’ on Lil Win so he should stay away from him, and he believes that is the reason why Lil Win has decided not to star in the same movie with him.

In an interview with Peacefmonline.com, he denied using any ‘juju’ on Lil Win stating however, that Lil Win is making it difficult for him to communicate with him because for some time now, he (Lil Win) has refused to answer his calls.

“I don’t have any problem with Lil Win or anybody in this industry. He is my junior bother and I played a major part in the beginning when he started acting and we have been in so many movies together. I think some people are corrupting his mind with false information about me but I wonder where those people advising him against me now were in the beginning, when he started acting”.

Reacting to these allegations for the first time, Lil Win, in an exclusive interview on Neat 100.9 FM’s “Entertainment Ghana show”, dismissed all those allegations, stating that it’s all attempts by some people to destroy his hard-earned reputation and his friendship with Kwaku Manu.
Lil Win laughed off the allegations, saying “I have no problem at all with my brother Kwaku Manu. I don’t know if he has a problem with me. It will be very sad for our fans to hear that Lil Win and Kwaku Manu are not on talking terms, but that will never happen. In this world, when you want to listen to what people are saying, you may end up not talking to your own friends and even your family members”.

On the issue of ‘juju’, Lil Win said he also heard that Kwaku Manu was going round saying he (Lil Win) was using ‘juju’ against him, that is the reason why he is not being cast in movies anymore.

“I don’t use juju. It is God who has made me who I am now, and I depend on God in all things. I have no problem whatsoever with Kwaku Manu”.

Lil Win said he confronted Kwuku Manu when he mentioned the issue of ‘juju’, and he accepted and apologized. “When I heard the rumors that he (Kweku Manu) claims i was using juju on him, I asked him why he said that and he apologized and admitted that he said that, out of anger and frustration because we don’t seem to be as close a unit as before, and that he wanted us to be back together again as good friends”.

Lil Win further stated that its possible he might have failed to respond to Kwaku Manu’s calls because he (Lil Win) did not know his (Kweku Manu’s) new number, but he is not deliberately avoiding him as being alleged.

“Maybe when he called me, I didn’t know it was his number. I have not said anywhere that I will not act with him. It is the producers who decide who they want to cast in their movies”.

Lil Win said, nothing would make him disrespect his senior brothers Agya Koo and Kwaku Manu, or anybody in the movie industry.

Ayitey powers pulled out of the fight 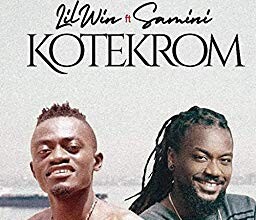