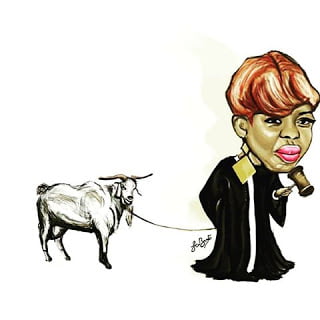 TV/ radio personality Valentina Nana Agyeiwaa, popularly called Afia Schwarzenegger has taken a swipe at the Judges who were caught on Anas Amereyaw Anas’ camera taking bribe in their line of duty.

Afia who was heartbroken after watching the three-hour video footage of the Judicial bribery scandal at the Accra International Conference Center described the situation as disgusting and embarrassing.

“God richly bless u Anas Aremeyaw Anas… All our leaders must bow in shame….it is quite embarrassing and disgusting to sell Justice for 300 ghc, goats, sex… In the case of judge Derry begging for goat instead of sheep, Ajet Nassam angry cos his balance delayed, Justice Quist abandoning sitting to chase bribe …aaaaahhhhh but do u blame the judges when all u see is a wretched court!!!! We will rather renovate parliament with Chinese chairs n nonsense instead of fixing our courts n keeping an eye on our judiciary system…If I have to work in that filthy environment, I guess respecting the rules of that company will be difficult…” – Afia Schwarzenegger wrote.

Becca at New York for Global Citizen's Festival
Ampong is incomparable - Daddy Lumba
To Top
By using this site, you agree to the Privacy Policy and Terms of Use *LISTED HERE*