The Police at Sefwi Adjoafe in the Western Region within the Bia West district have invited Nyankonton Mu Nsem’s reporter Odeshiaba Kwadwo Wusu threatening to arraigned him before court for not ‘covering up’ a crime story and reporting it on air.
It can be recall that Odeshiaba reported on Nyankonton Mu Nsem that Kofi Francis, 27, and his elder brother, 35, were severely beaten and stripped naked at Sefwi Adwoafua in the Western region for allegedly harvesting and stealing a bunch of cassava on a retired teacher’s farm last Sunday.

The suspects when asked by the 61-year-old retired teacher, Master Adeyah said they were going to use the stolen cassava for fufu. The teacher reportedly held the ‘thieves’ raised an alarm attracting villagers who stormed the scene and allegedly assaulted the two brothers and stripped them naked.

Information gathered later revealed the ‘thieves’ wanted an out of court settlement. The police after the story broke and was carried by a number of other media houses arrested our reporter for not seeking their permission before reporting the story.

According to the police, they do not want such stories from the district to be published since it tarnishes their image. Odeshieba narrating his ordeal to Nyankonton Mu Nsem said he was forced to write a statement which he is yet to do. He added, the police verbally assaulted him; calling all manner of names. 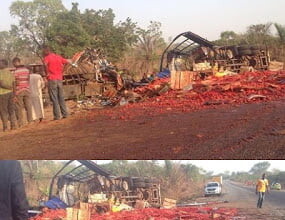