Ghanaian songstress and diva, eShun is doing all that she can to seek justice over her Instagram account which has been seized by her former boyfriend and manager, Stephen Mensah.

She told Zion Felix in an interview on the ‘Uncut Show’ the steps she has taken to retrieve her account.

The ‘Akyia’ singer revealed she has reported the incident to the Police Headquarters in Accra.

She hinted that after her statement was taken, the case has been forwarded to the cyber-crime unit of the Ghana Police Service and she believes the due process will be followed.

Before she reported the incident to the police, eShun recalled Stephen Mensah told her to pay GHS 120,000 if she wants her account back.

eShun said it is criminal for Stephen Mensah to keep something that doesn’t belong to him.

Currently, the Instagram account in question bears the name of NaaNa Blu, a new artiste signed onto Quophi Mens Muziq, while the user name still displays eshunonline, but all contents associated with eShun have been deleted. 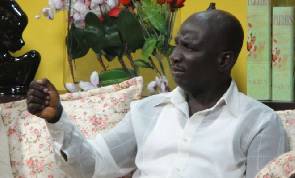