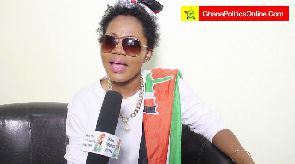 "Die hard" and ardent celebrity supporter of President John Mahama, Mzbel has revealed that twice failed flag-bearer of opposition New Patriotic Party Nana Addo Dankwa Akufo-Addo is not the chosen one and that he can not win 2016 elections .

Speaking in a video interview with Ghanapoliticsonline.com , the sexy musician said that "no matter what Nana Addo do he will not win".

" Many are called but few are chosen and I insist he can’t win hence I will urged all not to waste their votes but rather vote wisely by voting for John Mahama", Mzbel said.

According to her in an unlikely event that Nana Addo wins Ghana will fall down,collapse just as Nana Addo falls anytime he stands on his feet.

But perhaps Mzbel knows Akufo-Addo as an "intemperate" and "xenophobic" hence forwarned that "The future of our kids is at stake and we shouldn’t make any mistake by wanting to give nana a try", she said.

Meanwhile describing Nana Akufo-Addo as a man "full of tension" and "somebody who will divide us", she made reference to former President of Ghana, President Kufour in a video addressing cabinet in 2007 and forewarned the NPP against the dangerous traits of Akufo-Addo but according to her, the party did not listen and today they are paying dearly for their disregard for the wise counsel.