Moesha Boduong was onDelay’s hot seat and as usual, Delay really drilled her for the world to know whether she is deep in thinking or not.
According to Moesha Boduong, she left all her ex boyfriends because they were not able to provide her needs. She revealed that her boyfriend should be someone who can take care of her sick father, her brother, get her an apartment and car. Not only that, the guy should be able to buy phones, clothes and other things.

She revealed that her current boyfriend who divorced his wife before she met him has been able to pass through all these stages. To her, her boyfriend can never leave her unless she, Moesha Boduong decides to call it quits. Sandra, I’m very sorry for telling people your boyfriend was in jail for drugs – Moesha Buduong 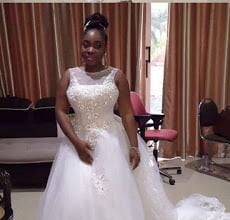 Pic of the Day: Eeei see what Kalybos is doing to Moesha Boduong on Instagram