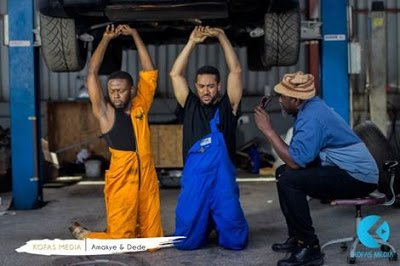 Information zionfelix.com is picking suggests that Ghanaian music legend, Amakye Dede is not happy about a new movie Kofas Media, producers of “Adventures of Kalybos” is currently shooting.

Amakye Dede is said to be complaining over the use of his name for the movie “Amakye & Dede” which production is currently underway.

According to the source, neither the two actors nor the producers of the movie have approached the musician to officially inform him about his name used as the movie title.

Zionfelix.com's informant continued that Amakye Dede is thinking of taking actions against them but did not state if it was going to be a court case.

Efforts to reach Amakye Dede on the issue have proved futile as calls made to him were not going through as at press time.

Teenage pregnancy boosts in Kumasi
Shatta Wale - Live It (Prod By Shatta Wale) (Da Maker)
To Top
By using this site, you agree to the Privacy Policy and Terms of Use *LISTED HERE*