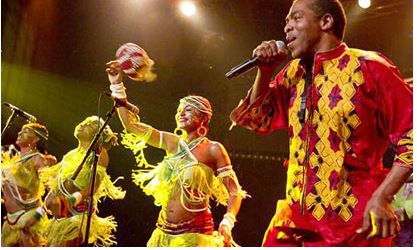 It was a full dose of home-made musical hits at the weekend for the music-loving residents of the Federal Capital Territory, when Afrobeat legend and four-time Grammy Awards nominee, Femi Kuti, stormed the nation’s political capital for his first ever live concert in the city.

The high-profile event, put together by Chocolate City Group in partnership with Etisalat, was a musical experience with the Afrobeat legend and some other acts including established performers like Niniola and Jesse Jagz as well as upcoming ones like Dunnie, Keline, ArrowMafia, Ricky Sani, Cheso and Anderson Afrolover.

Signs of a memorable night had filled the air once news about the concert broke into the public domain, and so it turned out as many fun seekers, lovebirds, business partners, friends and families as well as foreigners swarmed around the Sheraton Field to be part of the historic outing.

Expectedly, the evening began with performances from several upcoming stars like Anderson Afrolover, Ricky Sani, Cheso, Dunnie, Keline and ArrowMafia, with the last four giving very impressive accounts of themselves as they perform singles upon singles upon different genres of music.

With the ticking hours clawing the late evening hours steadily towards the midnight zone, and expectations rising, the show swung into life with the coming to stage of singing sensation, Niniola who got down to real dancing with some of the fans.

Hip-Hop crooner, Jesse Jagz did not need any introduction as vibes from his hit singles such as Murder Dem, Boom, Jaga Love, Bend Down Low, Bad Girl and Sugarcane Baby proved his popular with the audience.

With the right atmosphere already created, and members of the Positive Force Band arrayed on stage, it was self-evident what a night awaited the fans.

Full of the energy that has remained a standout feature of his performances, Femi Kuti guided the audience through a music journey beginning with some of his smashing hits like Wonder Wonder, Survival, Plenty Nonsense, Live for Today, Sorry Sorry, Truth Don Die, BengBengBeng, The World is Changing, No Place for my Dream and Changes.

The social crusader in him was let out intermittently as he spoke out against social injustice, corruption and indeed any form of social vices bedevilling the Nigerian state, to the admiration of the fans who sang along some of the hit tracts. One of the high-points of the night came on the heels of his mastery of the saxophone.

He had played a long mono-note on this for over ten minutes without breaking, thus confirming his rating as one of the most sought after and best live performers in the world. Some of the fans who commented on the concert expressed delight at the opportunity to be part of the musical experience. “Being in Abuja, we have always expected something like this.

Coming here tonight is one of the happiest moments of the year to me because most times that I have anything to do in Lagos, I always go to the Shrine. So, seeing Femi in Abuja is fantastic, “enthused Omar Lawal, a Civil Servant.

For Norwegian, Kaspark, the night was an opportunity to see Femi perform live after he could not do so on a previous visit to the Afrikan Shrine in Lagos.

“I have heard about Femi Kuti before now because he is very popular in Norway. I have also been to the Shrine in Lagos but I never got to see him there. Tonight is going great for me and I am enjoying myself,” he said so elatedly.