Professional Ghanaian boxer Braimah Bukom Banku Kamoko has confirmed that he was bleaching his skin.

According to the boxer, he was bleaching for President John Mahama to make him Ghana’s Ambassador to Germany after winning the 2016 general elections.

In an interview with Radio Gold’s Bernard Allotey on his Home Touch entertainment programme on Thursday, Banku said, “I’m bleaching my skin because when John Mahama wins 2016 elections, he will make me Ghana’s Ambassador to Germany.”

Banku continued: “Bleaching can’t affect my skin because I have a very good skin. Again, rashes can’t affect me because I am using cleaning Claire and I am taking medicine as well. So if you see me now, you will observe that I am from Germany. I want Ghanaians to know that I am a German now. I am at Ho right now with President John Mahama, at Okudzeto Ablakwa’s constituency.”

“If I don’t bleach they won’t give that position… and if you see me now I look fresh because of President John Mahama,” he added.

Bukom Banku’s confirmation came after photos of his bleached skin went viral on social media on Wednesday. Whilst some criticized the boxer, others argued the photos were fake.

But the boxer said people should not be concerned about his decision to bleach; “People shouldn’t be worried. I am changing my system for a while. I want to tell Ghanaians not to worry about me. I will bleach till August and then stop.”

The boxer added that he had put his boxing career on hold in order to campaign for John Mahama’s NDC party to retain political power. He said if the president didn’t win, then he would go back to boxing. 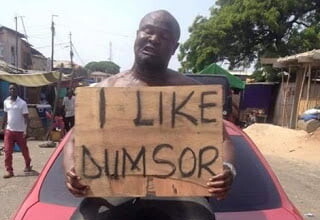