A crowd Tuesday gathered at the Kumasi Jubilee Park in the Ashanti Region to witness a spiritual battle between the General overseer of the International God’s Way Church, Bishop Daniel Obinim and Okomfo Yaw Appiah, a fetish priest.

Some photographs circulating on social media platforms show Obinim seated with some of his assistant pastors awaiting the arrival of the fetish priest.

Obinim also came to the grounds with a white coffin to place the fetish priest in after he has defeated him.

But after more than an hour of waiting, Obinim left the Jubilee Park after Okomfo Appiah failed to turn up.

In a radio interview, Okomfo Appiah said he was prevented by the police from going to the park since the gathering was against the Public Order Act -1994 (Act 491).

Obinim last week failed to turn up at the forecourt of Happy FM after he had challenged Okomfo Nana Yaw Appiah and other spiritualists to a spiritual battle. Okomfo Nana Yaw Appiah is said to be the spiritual father of the Bishop. BBC’s description of ‘Angel Obinim’s miracles will shock you Bishop Obinim explains why he punished children in church 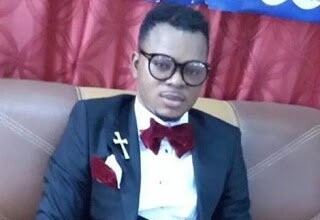 Video: I can make your a$s bigger, Enlarge your penis and Give you big breast – Bishop Daniel Obinim