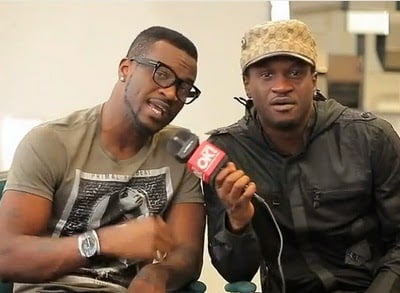 Are P-Square really Breaking up?
Rumor has it that the Nigerian Duo P-Square might be splitting up, We’ve gathered from our sources that Peter and Paul Okoye of P-Square having issues for a while now. They have been having disagreements on everything now…songs, videos, ideas etc…but because they are twin brothers, I figured well, they will sort things out… what siblings don’t fight? But recently we got exclusively from industry sources that the brothers fought each other physically during rehearsals. They had to be separated by their dancers. This is fact! And now their older brother, Jude Okoye, who is also their manager, just tweeted that after ten years he’s done.

Despite all these allegations, P-Square have maintained that they are not splitting.

In a statement through their publicist, the duo tagged the statements as “baseless” and “untrue”.

“I am too busy to give some wanna be blogger traffic,” their PR head
Bayo Adetu said. “I don’t know where that report is coming from. Maybe
they just want to get traffic to their site. It’s baseless and untrue”.

Jude Okoye’s tweet must have been related to something else, as he
still has “President/C.E.O Square Records” in his Twitter bio.

boyfriend exposes girl for cheating on him