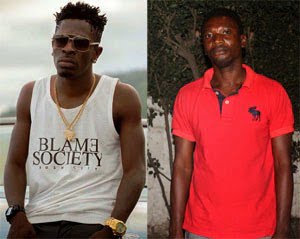 The man, who gave his name as Rashid Abu, told DAILY GUIDE that Shatta Wale beat him up in the presence of his (Shatta’s) manager, Lawrence Nana Asiamah Hanson, aka Bull Dog, and some ‘macho men’ over an amount of GH¢150 the musician owed him.

Attempts to speak to Bull Dog or the controversial musician were unsuccessful as their lines were not active.

Shatta Wale, known in real life as Charles Nii Armah Mensah Jnr., and his purported hoodlums allegedly picked Rashid from his shop at Adabraka Sunday afternoon under the pretext that he was going to pay GH¢150 he owed the young man at his East Legon residence.

“He came to pick up some outfits worth GH¢150 from my shop five months ago but refused to pay. After some time, when I called he refused to answer. I called him on Sunday; he picked it and started insulting me. He even told me that he was not going to pay me my money. Later he came to my ‘Blow Money Fast’ boutique at Adabraka in the company of some ‘macho men’ and Bull Dog. He asked that I join him in his car so that he pays me my money,” Rashid Abu stated.

He asserted that he was reluctant to go but after pleadings by Bull Dog, he entered the car, adding that Shatta Wale drove him all the way from Adabraka to his house and later forced him to kneel down and apologise for calling to demand for his money.

According to the young businessman—who is believed to be in his 30s—Shatta Wale gave him several slaps with a bundle of GH¢50 notes while Bull Dog looked on.

Rashid, who naturally tried to defend himself, was cautioned by the ‘macho men’ not to venture, else they would kill him.

“When we got to his house, the ‘macho men’ opened the gates and once we got in, Shatta Wale asked me to kneel down and he began slapping me with a bundle of GH¢50. I tried to defend myself but his thugs warned me to stop, else they would kill me right there. Bull Dog even told me to do what Shatta would tell me else I would be severely beaten up,” he narrated.

Rashid told this paper that Shatta gave him the bundle of the GH¢50 notes he used in slapping him and instructed him to pull his money out of it. “I refused but after the ‘macho men’ had threaten to give me more slaps, I took the money, counted GH¢150 for myself and gave him the rest,” he added.

The victim has since reported the incident at the Central Police Station in Accra. He was prepared to purse the assault case in court, he told DAILY GUIDE.

Shatta Wale, as an artiste, has gained notoriety for insulting persons and institutions whose opinions about him he does not agree with.

He was recently in the news for publishing on his social media page, some four videos of himself making derogatory and insulting statements against Charter House.

The musician also hurled insults at his colleague musicians, workers of Charter House and owners of the company. A portion of the video has even been said to border on threats.

Charter House, a private company with expertise in events management and production, later sued him for defamation.

They are demanding GH¢10 million as damages for the defamatory comments made in the four videos that the artiste had uploaded on the social media.

At the first hearing, the court granted an order restraining Shatta Wale from making further defamatory remarks about Charter House.

Shatta Wale is now begging for an out-of-court settlement of the case and has formally written to lawyers of Charter House to that effect.

Singer Lady Jay Assaulted By Manager
DOWNLOAD: Sarkodie ft. shatta Wale - M3gye wo girl (Original Untagged) (prod. by killbeatz)
To Top
By using this site, you agree to the Privacy Policy and Terms of Use *LISTED HERE*