“Our most sacred text is a compilation of all of Shatta Wale’s verses and music. Through our ‘Shattle’, we can better ourselves both mentally and personally to become true Shattas.”

An Article published on OMGGhana Reads:
A group of 10 friends from Nima, Accra have taken their admiration for dancehall kingpin Shatta Wale to a whole new level – spiritually to be exact. OMGGhana can confirm that Yaw Agyei Mensah is the founder and self-proclaimed “Shatta Minister” of the SM4Lyfe Ministries.

Shattaism began about 6 months ago in a small house in Nima.

There were 10 original disciples and we used to meet every Sunday and just sing and dance to his songs together. One day, while drinking brukina and smoking ganja (marijuana), we just sat and reflected on one of his songs, and the spirit led us to the realization that Shatta Wale is God sent,” Yaw explained.

Since that day, Yaw became the leader of the SM4Lyfe ministries, and adopted the mantra ‘Divine Shattas’. From May 2014, ‘SM4Lyfe Ministries’ has been registered with the office of the Registrar General’s Department as a non-profit organization. Through outside donations and investment by the original members, the ministry has been able to buy a building that will soon be used as their first temple. The rest as they say is history!

Till date, the congregation has grown to almost 250 divine shattas. On a visit to the temple last Saturday night, OMGGhana had the opportunity to listen to Minister Divine-Shatta Yaw Mensah preach from the principal text of Shattaism known to them as the Shattle. Yaw explains;

Our most sacred text is a compilation of all of Shatta Wale’s verses and music. Through our ‘Shattle’, we can better ourselves both mentally and personally to become true Shattas.”

The church estimates that there are at least 5 million worshippers of Shattaism in Ghana, but 99% simply do not realize this.

Its very simple, wherever you see a group of people defending the actions of his divine Shatta Wale, they are practicing Shattaism. It is not about believing he rose from the dead, or that he is perfect or something, oh no, it is about recognizing that Shatta Wale is a Divine Shatta that we all so happily strive to be,” Yaw explained. 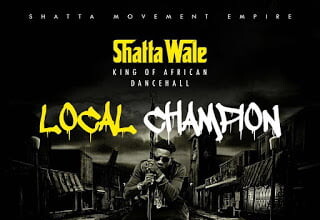