NYDJLive reports the sad incident is reported to have happened late Wednesday evening July 29 2015 at the 37 Military Hospital in Accra after the mother had been admitted at the hospital since Sunday. Cause of death is yet to be established.
Stonebwoy posted a dark image on Facebook with the caption “MAMA!! Only Jah Know!!” and his road manager Blakk Cedi who confirmed the news and has since changed his profile picture on Facebook to a dark image to signify a state of mourning.

Stonebwoy recently released a song to show appreciation to mothers.
Our condolences to the artist and his family. Don’t compare me to Any Artist – Kaakie Speaks 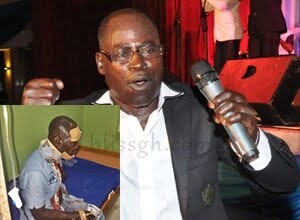