The General Overseer of the Redeemed Christian Church of God, Pastor Enoch A. Adeboye, has advised the male members of his church not to marry certain kinds of women.

The pastor who spoke with conviction during his Sunday service said based on his vast experience with dealing with several couples in his church, he knew the right kinds of girls to marry.

The following 5 characteristics stood out the most.

2. Don’t marry a woman who can’t pray for one hour non-stop

3. Don’t marry a woman who is lazy

Pastor Adeboye says a woman who is lazy as a girl will make a lazier wife and mother in future and asked men to desist from such women.

“Don’t marry a girl who is worldly! If you do, you have carried what you’ll worship for the rest of your life!” he advised.

A twitter user shared part of the sermon with the caption “Thank you for solving this twitter debate daddy.”

Enjoy the video below:

Thank You for Solving This Twitter Debate Daddy pic.twitter.com/3xsNcEdyv5 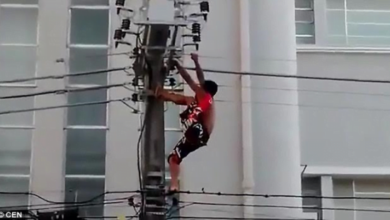 Video: Man gets electrocuted after climbing an electric pole to entertain people at a political rally