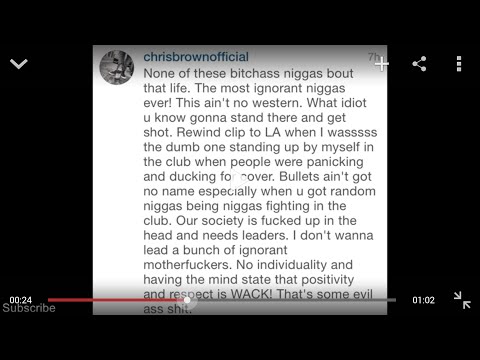 At least five people have been shot at a Chris Brown concert on Sunday in San Francisco, California, USA.

A real massacre started at the Fiesta nightclub where the R&B singer was performing, when five of his fans were wounded by the unknown. Mobile phone footage shows Brown singing surrounded by his security as dozens of fans are enjoying the show.

Then, suddenly, gunshots ring out, sending everyone including Chris into panic. He is immediately taken away off stage by his bodyguards. People begin screaming, crying and fleeing the club while some shout “get down” and lie on the floor.

Three more shots are heard and the camera pans round to show people covering their heads and lying on the floor. After awhile police arrived on the scene, they detained several people but no arrests were made.

Five victims with arms or legs wounds were admitted to hospital, all of them are expected to survive. The singer is believed to be unhurt as shortly afterwards he tweeted “I’m 100″.

It’s not the first shooting incident Chris Brown has experienced. In August last year the singer was hosting a party in Los Angeles when Death Row Records executive Suge Knight was shot.