Highlife artiste, KK Fosu did not take it lightly when a listener of Happy FM’s Showbiz Xtra, sent a message to threaten him following his remark on Shatta Wale on the same platform.

KK Fosu had stated that the disqualification of Shatta Wale from the 2016 Vodafone Ghana Music Awards was justified because the dancehall artiste denigrated the board and the entire scheme.
According to him, Shatta Wale’s decision to sell the plagues he won in 2014 was a sign of disrespect to the scheme and saw nothing wrong with the exclusion of Shatta.

“If you give me an award, I will accept it but if you don’t, I will never malign you nor threaten you not to nominate my works again. Whatever we say today will surely bounce back to us and Shatta Wale should know that. So do you expect to be nominated after threatening the organisers? No!” he said.

Mohammed Mumuni, a fun of Shatta Wale, who took offence to what KK Fosu said, sent a text message to the show to threaten the singer to be mindful else, he would come after him knowing where KK Fosu stays.

The ‘Anadwo Yede’ hit-maker was pissed off and warned that Mumuni dare not threaten him because he can equally be violent.

“I have people in Nima, you have no idea. Wherever you go, I have wild followers… Whoever sent that message, don’t play with me. From here, I can drive to wherever he is. He can come and face me. It’s not as if we can’t misbehave; we respect ourselves. We are gentlemen so don’t try me. If you want war, you will get it. When did Shatta Wale and co see guns? Don’t f**k with me. When you text and try to threaten me, what do you want to do,”he fumed.

KK Fosu who was in the studio to promote his new single, ‘I’m back’ which features Sarkodie, had to be calmed down before the interview could continue.

He later apologised for his actions and asked his fans to support him as he was back for good.

“I’m sorry to anybody who feels I stepped on his toes. Pray for me because KK Fosu is back,” he said.

Ahuofe Patri is Single and ready to Mingle - Read the requirements 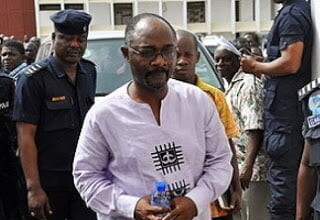 Drama: ‘We will collect our money today’ Man attacks Woyome at Achimota Mall over GHC 51.2m